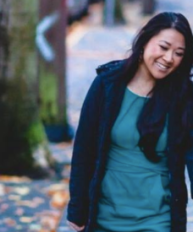 “The arts have the ability to rewrite history. Changing the face makes all the difference.” ~ Cindy Tran

The above quote is from my friend and professional colleague, Cindy Tran (pictured right). Together, Cindy and I stumbled upon one of the most impactful events I’ve experienced in my lifetime to date. The work of Kehinde Wiley is now featured as a special exhibition until May at the Seattle Art Museum (SAM), entitled “A New Republic.” We were able to participate in its opening night event. She said those words to me as we were leaving, debriefing the experience. 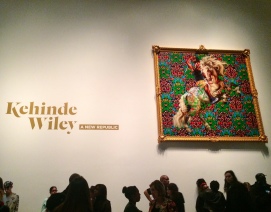 I’ve shared photos from moments throughout the evening at the end of this post–with captions that also include excerpts of written words from the exhibit.

In essence, I had the opportunity to witness the retelling of history through Kehinde Wiley’s work. Faces that were absent or altered in our history books were restored to their rightful place in their time. Instead of religious figures that were people of color being depicted in art as having white faces, all was righted. Similarly, black men who have been depicted as violent and fierce were shown to be the complex, resilient, bold human beings they actually are in the world.

Wiley took classic works from the Renaissance and repainted them with people of color–showcased with just as much regal flair as their original subjects. Moments ago online, I bought the DVD “An Economy of Grace,” which was also being shown within the exhibition to visitors. It reveals that “for the exhibition Wiley teamed up with Givenchy designer Riccardo Tisci to design costumes for the subjects, studying the history of female portraiture at the Louvre to find inspiration for the historical guidelines for femininity and beauty.” (Source, Huffington Post) Such striking and relevant juxtaposition of Renaissance fine art with hip-hop culture, and high fashion Givenchy with street style. Putting people on equal footing with each other, marked by honor and respect for human dignity.

Just days prior to this experience, I attended Gay City‘s Arts Showcase at Seattle’s Town Hall. If you’re not familiar with Gay City, it is a wonderful local space that holds the mission of promoting “wellness in LGBTQ communities by providing health services, connecting people to resources, fostering arts, and building community.”

This event featured musician Mary Lambert as well as spoken word and performance artists. Ebo Barton & Nikkita Oliver (see more from Nikkita also here) were particularly striking in their spoken word offerings, and Mary Lambert’s songwriting and humor hit every chord of emotion. The evening was about, in many ways, how acknowledging our true identities brings freedom to ourselves and others. 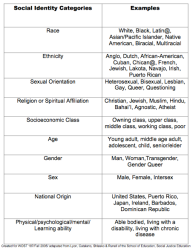 Social identity theory unpacks the fact that the same elements of identity that bring us affinity with people, can also aid in separation from each other. These identities include: race, ethnicity, sexual orientation, religion, socioeconomic class, age, gender, sex, national origin, physical ability. Society favors particular types of people in each of those categories. The more identities you have that are minority / not majority, the more likely it is for you to be shunned, pushed-out of opportunity and access, excluded in relationships, and lacking voice in social communities. (A screenshot left are some of these categories; check out the source – including an identity wheel graphic which might be helpful)

At this Gay City Arts Showcase, I was struck by the fact that telling true stories has power. There was so much joy in the room, along with the pain being communicated from the journey. It felt like church–all of the soulfulness and centering you would hope for in a deeply spiritual experience.

I have the great honor of knowing a man named Larry Walls (pictured left). He is a doctoral student at Seattle University, a former submarine naval officer, and a good friend. We have lunch together every few weeks, and our conversations are always rich and challenging. A few months back, Larry shared with me about a recent experience that struck me deeply. In class, they were reading from an author about a historical event in a town that Larry had called home, at a time when Larry had been present and involved in the community. Larry knew that the author was incredibly mistaken about how the events transpired. He was told by the professor that he had to first acknowledge the theory and summarize the author’s words before giving the counter narrative and saying what really happened. As Larry shared this “due process” with me, I was struck by the politically and socially delicate nature of history and “facts.” When it comes to history, education and our social realities, it takes intentional unlearning in order to relearn and engage truth.

Photos and my captions from Kehinde Wiley’s show here:

Excerpt from above left exhibit description: “…All of Wiley’s portraits celebrate his sitters. He challenges long-held assumptions by opening new doors of perception, offering unprecedented interpretations and reimagining the black figure as subject, object, and agent.”

Above right, bottom: All of the promotional pieces from the show, including my purchases of the exhibition book, calendar and postcard books. 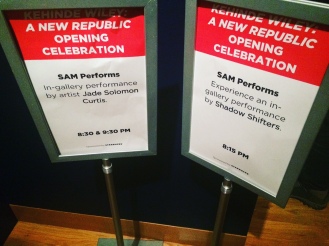 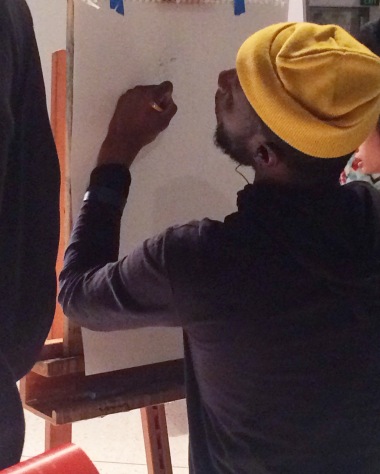 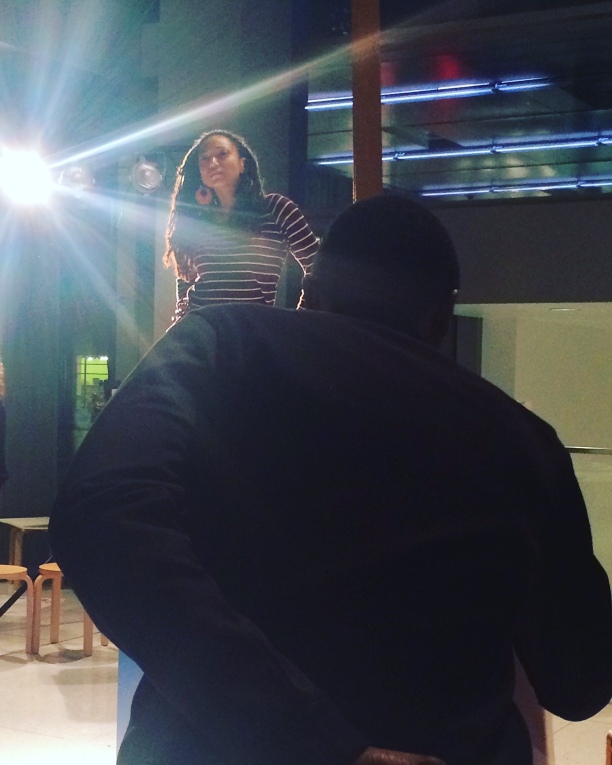 Above: Community members were welcome to draw live models. 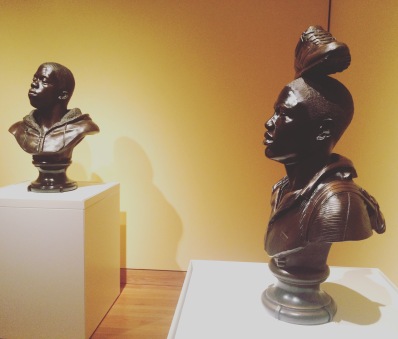 Above: Bronze busts by Kehinde Wiley

Above: Interactive widgets allowed guests to play with patterns, much like Kehinde Wiley uses in his work. 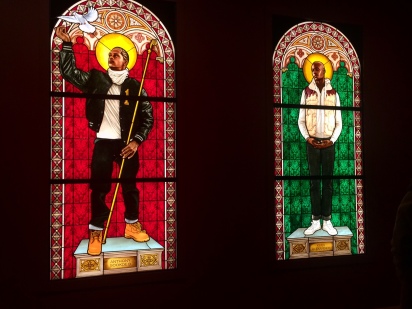 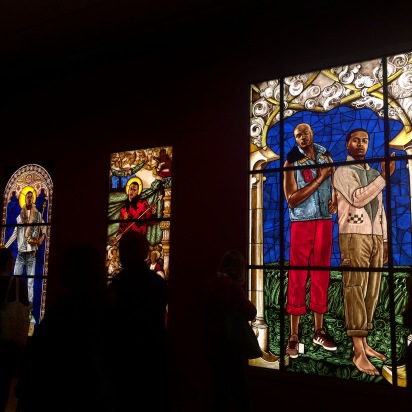 Above, top left – Description: “Apart from secular rulers, the Christian church was the second power that determined the course of history in Europe. Images of biblical figures had a commanding presence in churches and palaces–often these were the only human likenesses that ordinary people, farmers and laborers, would see in their lifetimes. Fashioned in the image of the white ruling class, these images of biblical protagonists had no relation to historical or geographic accuracy. As such, these images helped to amplify and legitimize the existing European authorities and hierarcies. Wiley’s religious portraits act on several levels–most significantly, they insert young men and women of color into the canon of biblical figures to call attention to this misrepresentation. At times, they also reverse gender roles, which is manifest in particular biblical stories or evident from the titles.” 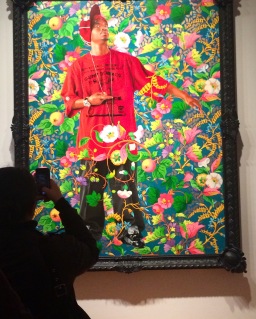 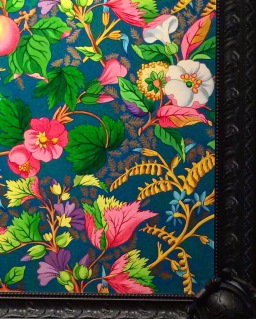 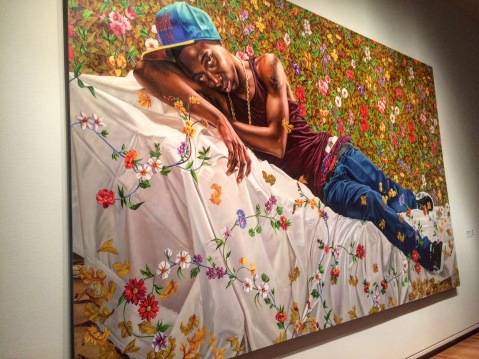 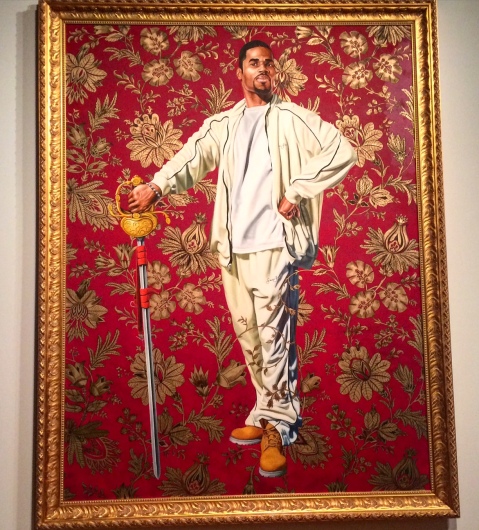 Above: Art pieces from throughout the show, “A New Republic.”

Above, top left – Description excerpt: “Wiley’s rethinking of portraiture was prompted in part by a young black man’s mugshot profile he found in the streets of Harlem in 2001….In comparison, Wiley’s stately portraits of young men present individuals with self-possession and authority, firmly in control of their image. Wiley often introduces a bold contrast between his young men in hip-hop inspired clothing and sportswear and the surprisingly lyrical floral backgrounds of his paintings. While movies and the media frequently project negative stereotypes of black men in blighted urban areas, Wiley gives them a celebratory context. As a result, the poetic and more feminine associations of the cascading flowers confront the “cool” of street culture, as the artist positions the sitters in entirely new and unexpected ways.”

Above: Caption and still of a video on display in the exhibit.

Above, left – Description: “If self-possession and control are the hallmarks of power, Wiley’s video shows the tenuousness of this undertaking. Andy Warhol’s filmic ‘screen tests’ from the late 1960s demonstrated how fatigue will undo the carefully composed face that we offer to the camera. Smile adds another layer to this exploration, in its resonance with the expectation for black men to appear friendly and non-threatening to mainstream culture at all times.”

Above: “Wiley began his The World Stage paintings in 2006. He travels widely–to China, the Middle East, Africa, India and Central and South America–to portray people of color in light of their histories and narratives…to get away from the televisual notions of disease, war, and famine that we are sort of constantly bombarded with…Celebrating people of color, giving them a sense of presence, grace and visibility…”