I was one of probably three non-therapists this past month in Vancouver, British Columbia at an international Narrative Therapy conference. One of the founders talked about a moment in conversation where the person was taken aback at his authenticity and humanness. In response and to share where he was coming from, he said: “I’m trying to be a person. Not a person impersonating as a professional person.”

I love that statement. It reveals that it’s possible for a human to sit alongside another human, adding to their life, but still meeting them eye-to-eye in a real way.

The perspective of narrative therapy privileges the knowledge that the person or storyteller has about their experience versus the assumed expertise of the therapist. It’s a fascinating and empowering approach to working through life and change, and it’s one that I take in my work of Cambio Coaching & Consulting with individuals, duos, teams and organizations.

Marcela Polanco (pictured left) is a narrative therapist originally from Bogotá, Colombia who talks about “systems of professionalism.” She talks about “neoliberalism, where adventure has been murdered and chopped into step-by-steps.” How’s that for a poetic, vivid description! She cites bell hooks‘ reference of the business system of practice–institutionalization based the exclusion of others. Marcela and I both are huge fans of Paulo Freire, most well-known for his book, “Pedagogy of the Oppressed.” Freire is all about the liberation of the human spirit and the empowerment of people to ultimately be themselves in the world–expressing ideas, learning and taking responsibility for their own consciousness.

Sure, we need people dedicated to fields of work and study. We don’t want someone performing surgery on the human brain or working on a plumbing leak without expertise. However, acquiring expertise doesn’t have to be at the expense of our humanity.

I had the privilege of hearing Marcela Polanco speak several times at the conference. Here is another, longer excerpt from her words:

“Our humanity is being shaped into being a kind of professional and is created in contrast to someone who is not professional and is under our observation. For example, ‘I’m going to see a family today (in therapy).’ We categorize types of people out of that professionalism. There are firm lines in between–keeping us from engaging other people. This system that is embedded in professionalism or corporatization of profession, markets problems to attract people, and then creates need by perpetuating those problems. If this is the context in which we work, how can we keep humanity alive?“

I want to highlight the first sentence in the above. “Our humanity is being shaped into being a kind of professional and is created in contrast to someone who is not professional….” I’ll summarize in my own words what I hear Marcela saying here: Professionalism has the ability to remove our humanity, and in its stead, give us a plastic face that is deemed to be superior from other humans’ faces–cutting us off ultimately from equal-footing relationships with other people. 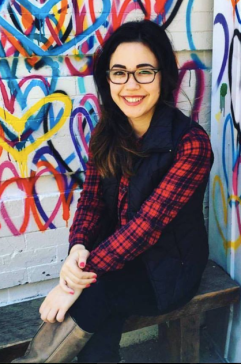 Earlier this year, I shared my autobiography with colleagues in a “Leading with Emotional Intelligence” retreat setting. I was having a hard time weeding out all that I’ve done professionally in my life and getting to the true “stuff” of story–the parts of emotion and presence where I could really show up as a human being. One of my colleagues, Tess Matsukawa (pictured right), interjected in a moment when I was wrestling with it all and trying to connect to the group in more of an authentic way. “You’re so much more than your productivity. Productivity isn’t what we need.”

I find real meaning and challenge in the concept of “a human being versus a human doing.” Sure, it’s a play on words and a bit cheesy. That aside, I recognize that in my social network of origin (family, adults that modeled “normal life” to me in my formative years), I was raised to be a “human doing.” However, now I find that everything in my body rejects that way of functioning in the world. The more I trek into adulthood, the more I recognize how much I yearn to be a true “human being” that is content with not doing or being productive 24 hours a day, 7 days a week.

I can’t wait to blog about a training I just attended on “building resilience.” During that hour, one of my colleagues talked about a bumper sticker he saw on the road that had significant impact on him. It read: “Don’t just do something. Sit there.” When searching online to see if I could find it, I found this one (pictured right, source). It also has a lot to say, through the tone of irony and humor. “Do something productive. Stop being yourself.”

The other day, a dear colleague and friend Brendon Taga (pictured left), talked about spring cleaning and the accumulation of meaningless “stuff” that can happen in life. He said that he would often ask himself: “Am I ever going to throw this out?” and if the answer was yes, then “Why not throw it out now?”